Business at Nobel is running as close to normal as can be expected under the circumstances, but we are taking extra measures to provide our products and services to customers in a safe and efficient manner. Our priority, as always, is to protect the health and wellbeing of employees, customers and other commercial partners. 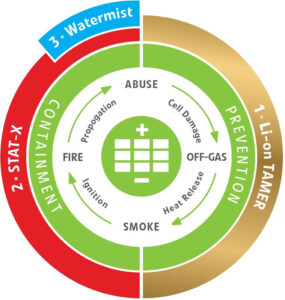 Nobel has recently been appointed by Xtralis, a Honeywell company, to be a UK distributor of Li-on Tamer®, the leading lithium-on battery rack monitoring system designed to provide an alert to ‘off-gas’ events that occur early in the failure mode of lithium-ion batteries, well in advance of smoke detection and traditional flammable gas detection. When the Li-on Tamer® sensors detect off-gas, the system immediately and automatically communicates with the BESS battery management system (BMS) to shut down the affected battery stacks to help prevent thermal runaway.
In the majority of lithium-ion battery off-gassing events, Li-on Tamer® should prevent the need for any further fire protection measures.

Notwithstanding successful deployment of the Li-on Tamer® system and shutdown of power by the BMS, there is no guarantee the affected batteries will not continue to rise in temperature to the point of so called ‘thermal runaway’, a risk inherent to lithium-ion batteries, which is a self-perpetuating chain reaction where excessive heat keeps creating more heat, potentially spreading from one battery cell to the next and creating a fire condition.

In the event of thermal runaway, smoke will be detected, triggering the containment stage of the Nobel fire protection solution; that is, deployment of the Stat-X® condensed aerosol fire suppression system for rapid knockdown of the nascent fire with a view to avoiding propagation. Nobel is the exclusive UK & Ireland distributor of Stat-X®, a UL-listed product that is now the fire suppression system of choice of several lithium-ion battery OEMs and leading global BESS integrators.

Nobel believes Li-on Tamer® + Stat-X® represent best-in-class prevention and containment measures, together providing robust BESS fire protection. However, the very nature of Lithium-ion batteries means there is a certain element of randomness to how any given battery cell reacts once it has been damaged, be it the nature or extent of off-gassing, temperature increase, fire condition, or propagation from cell to cell. There is also the potential for explosion if left unchecked.

Also, lithium-ion battery fires are at risk of ‘re-flash’, minutes, hours or even days later having seemingly been put out. As such, Nobel recommends a back-up Cooling option in the event of fire propagation, specifically a Watermist system with deluge misting nozzles located internally within the BESS. The system can be linked directly to a water supply such as a dedicated tank, alternatively a fire brigade pumping-in breech can be installed externally on the BESS container.